The other week I went with my mom and Marshall to the Health Expo. I love going to those sorts of things and finding new products, or new things I could do to be healthier.


As we were walking around I smelt the air changed. I looked around and sure enough we were coming up to a air filtration booth. We stopped and talked to the reps for a while and ended their draw for a rental of one of their units. They were really informative, and I was really interested but you know you never know how well those things work until you try it out yourself right? Well turns out I won! They brought the unit over last Friday and I had it till Monday.


I was really excited about that because we wanted to get something in our house (when we buy one) but like I said, it’s hard to know which one to get.

So we had it on in there and it was amazing the difference you could notice. We had the bedroom door closed for a while, and when I went in there I asked Marshall “what’s smells in here? Is there something rotting or something?” but it was just the air! Isn’t that so bad?

Anyways, so coming from a happy “customer” I thought I would share this find. It’s an expensive product, but I think it’s so worth it. It’s the air we breathe after all!

Processing Chamber
· Contaminated air is directed into the chamber where ambient humidity and multiple nanometer wavelengths and frequencies combine to create an oxidizing formula and produce hydroxyls.

· The quartz crystal optics are finely tuned to deodorize air flow, eradicate bacteria and other microorganisms, and produce hydroxyl molecules.
· The purified air is recycled back into the environment along with hydroxyls to further decontaminate surfaces & contents.

The Odorox Cascade Effect
· Once the hydroxyls are created, they are sent to "seek and destroy" odor molecules, bacteria, viruses, mold, VOCs and other chemicals.
· Notably, the process simultaneously decontaminates the air, surfaces, and objects.
· This system does not require all of the contaminants within a room to pass through the processing chamber, which guarantees a more rapid and thorough decontamination. 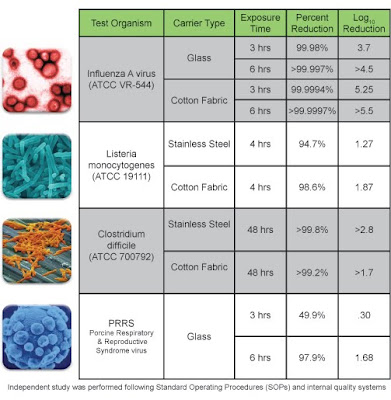 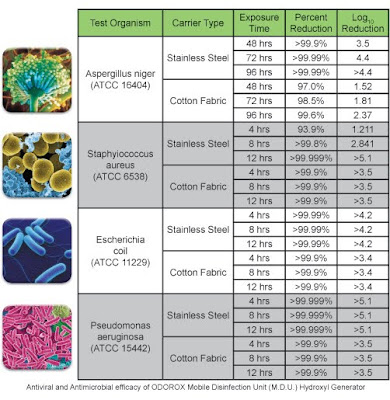 Representative Organisms
Influenza type A viruses are the most dangerous human pathogens among the influenza types and cause the most severe disease. Influenza epidemics result in 250,000 to 500,000 deaths globally each year.
Listeria monocytogenes is a gram-positive, rod-shaped bacterium responsible for listeriosis, a lethal food-borne infection that has a devastating fatality rate of 25% (Salmonella, in comparison, has a less than 1% mortality rate). It is incredibly hardy and able to grow in temperatures ranging from 39°F (4°C) to 99°F (37°C).
C.difficile is a spore-forming, gram-positive bacillus that causes potentially life-threatening colitis. Its spores can survive outside the human body for months on surfaces including bedrails, commodes, bedpans, thermometers, wheelchairs, endoscopes, bathing tubs, and the hands of health care workers.
Porcine Reproductive and Respiratory Syndrome (PRRS) is a small, enveloped RNA virus that causes a disease of pigs. This economically important pandemic causes reproductive failure in breeding stock and respiratory tract illness. The PRRS virus cost the US swine industry in excesses of $560 million in losses each year.
Posted by The Sweet Details at 8:00 am