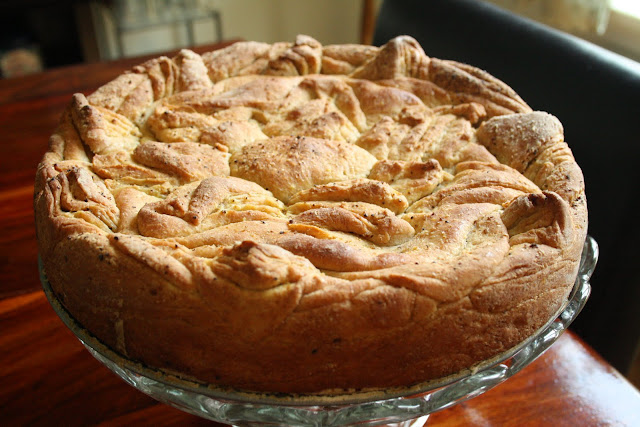 I found this recipe and posted it as one of my Baking Goals. Unfortunately I forgot to ask for consent before hand and just let the blogger know when I posted it that I featured the recipe. Long story short she wasn't too happy to be featured and I had to reluctantly take the recipe down (I don't understand why someone wouldn't love to be featured on another blog but that's a whole other story!). I wanted to still post the recipe because I thought it was a really cool idea. I looked for another source, and found one!


I adapted it from this site and I hope you really enjoy it. I had to rework the whole recipe, and all the photos are my own so I feel really great about getting to post this "original" for you all :) 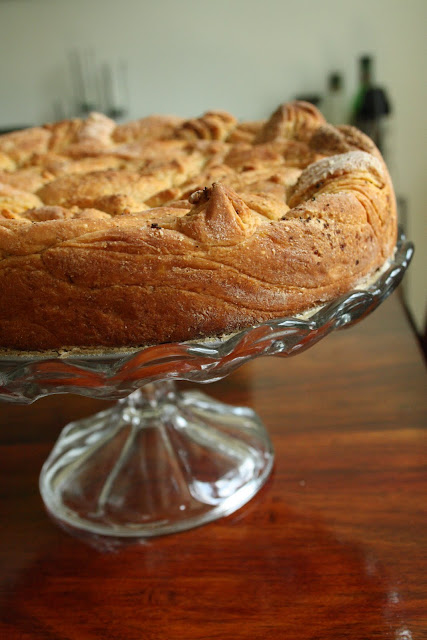 (When I was converting this recipe I didn't catch the C to F in time and I was cooking the bread at 200C! I salvaged it but I just wanted to let you know that this bread normally is a lot fluffier! It still tastes great though and I think I'll bake it again some time!)
Ingredients for the dough:
3 1/4 cup flour
1 cup milk
1/2 cup oil
2 eggs
2 3/4 tablespoons fresh yeast (about 17 grams)
1 teaspoon of sugar
2 teaspoons of salt

Optional:
Seasoning of your choice

In lukewarm milk sprinkle sugar and yeast and let it foam. When it foams add the rest of the dough ingredients and kneads into smooth dough.

Cover with a clean cloth and leave in warm place 30 minutes to rise. After the dough has risen knead it and divide it in half, then cut a small piece off one end (a little less then half of the half)

Leave the smallest piece on the side, which will be the center for the pogaca. Divide the biggest piece into 5 five equal parts.

Roll each one into disk shape and grease everyone except the fifth with the melted butter and stake them on one another.

Optional: After buttering the piece sprinkle your favorite seasoning between each layer. I did lemon pepper and it turned out great!

Roll the fifth piece a bit wider and put it over other disk shaped pieces and fold up the the others pieces to get a shape of pogaca.

Move the pogaca carefully in the butter and then into a flours cheese cake pan (28cm).

With a sharp knife cut eight pieces, leaving at least 1 cm from the end of the crust.

Pull each cut section up towards the edges of the pan, away from the middle of the area.

Repeat this with the other half that was put aside (disk shapes, buttering, and cutting etc.) Make sure to put the cut "peddles" in between each of  the first large rings peddles.

Form the smallest piece of the dough into a ball and put it into the middle of pogaca.

Optional:
Whisk the egg yolk with milk, and brush over pogaca. Sprinkle the center round with some flax seeds and the rest of the petals with sesame seeds.

Put the pogaca in the oven for 10 minutes. After 10 minutes cover the pogaca with parchment paper and reduce temperature to 180 ° C and bake for another 20 minutes. Then remove the paper and bake another 6-7 minutes. When baked remove it from the baking pan and cover with clean kitchen cloth till it cools a bit.

Tip: This recipe wasn't in English when I found it so I used Google Translate to get me started. Also the measurements were in grams and ounces so I used Calculate Me to help get a good North American measurement.
Posted by The Sweet Details at 9:00 am